We are Nicolas and Florence, both passionate about dogs since childhood.
Dogs were always a part of our lives, and we’ve learnt to know them, love them,
respect them and consider them as life companions, as family.
We both met thanks to the Australian Shepherd. We both had a female Aussie, and loved the breed for its look, and versatility. Nicolas introduced me to Boxers, wonderful dogs, big hearted clowns. 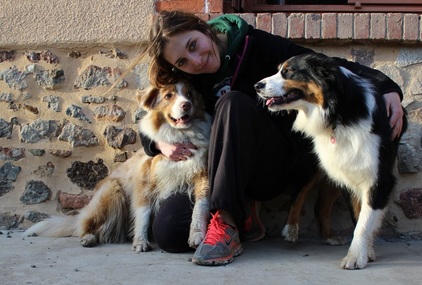 I’m, Florence, my first dog was Harley, who came into my life in 2012.
It was 11th may 2012, and I will always remember this day! The first Australian Shepherd I met was an unregistered Black Tri male, a friend’s dog.
I literally fell in love with him and immediately searched about what was exactly an Australian Shepherd. Versatile, loyal, intelligent… I had no doubt it was THE breed that matches my personality


​​As I’m a passionate person, I told myself “if you want an Australian Shepherd, let’s do it the right way !” I wanted a registered dog, a genuine one, from a breeder. So I searched my dreamed dog. I wanted a black tri male. I didn’t want any other color and absolutely not a blue merle, which I didn’t like at all (a shame as blue merle was very trendy!). 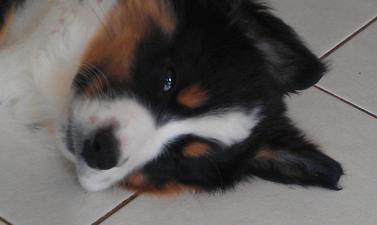 Then one day, I saw this little face… (how could I resist??). I contacted the breeder and we connected right away. Her description of the puppy was everything I was looking for: kind, nice, cuddly… Yes, yes it was a little female I named Harley, as soon as I put an option on her.
7 hours’ drive (one way) to go and see her, and 7 hours’ drive again, one month later, to bring her back home.
My sweet little dog! She wasn’t so hard on me, as I got her busy mentally and gave her all the physical exercise she needed, as I lived in the countryside by this time.
​
I chose to have a dog (worse: an Australian Shepherd!) while leaving in an apartment, so I was responsible for taking good care of her.
She wasn’t alone more than 4 hours. She was THE perfect dog for me, and I enjoyed a lot sharing time with her, doing agility and dog shows, even if she only had “Very Good” (regarding her body structure), I enjoyed running on the rings with her 
Today, Harley is spayed but she’s still having good time with us, playing tricks and obedience. It’s a real pleasure to train her using Clicker Training, she’s very responsive! She’s a very smart dog who has a strong will-to-please: a pure delight ! 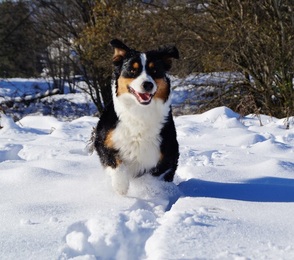 ​I had the opportunity to welcome Harley’s half-sister at home during 4 month, Fireflies Melody of the Little Black Moon, as a foster home.
A long story, but a wonderful little dog. They got on well together very fast, and this situation convinced me that having a second bitch at home, in the apartment, was OK. It’s been very hard on us when she had to leave, but her owner was able to take her back, so it was time for us to split.

What happened next? I met Nicolas, who owned Hiela, and then we bought our little Happy, then Isin the Boxer, and so on...
I could write a lot more of stories, but the conclusion is this one: I’m crazy about dogs! They are so important for us. By the way, I’ve graduated from a 6 months course in Dog Grooming, with Vincent Pastor (World Champion in Dog Grooming).
I’m also currently following a Dog Trainer and behaviorist program, Cynopsy, based on a global approach (environment, psychology and family sphere)
It’s very interesting and I’m very pleased to follow this course. Mutual understanding, and respect between dogs and owners are the highlights of this training program.

Nico & Tracy des Roses en Donzy
...Nicolas ...
​
Breeding Boxers? My family and friends were not surprised I decided to do so! My parents owned a female boxer, Tracy des Roses en Donzy, born in 1982, the year I was born myself.
She immediately took care of me, guarding my bedroom, barking when I was crying, helping me with my first steps!
She was an adorable dog, with a wonderful personality!
I lived with many other Boxers when I was a child, Baque des cinq Genets , Manas von Maskenpirol-
​​

Chubby et Nico
The first time I saw an Australian Shepherd was in 1999, with my father, during an obedience trial. I saw this amazing dog running towards the box, and smoothly slipped with the right speed until stopping exactly at the right spot.
Delbret’s Chubby Blue Bear arrived a few years later in our family. His nickname was Big Cud’ because of his docked tail, which French Aussies lovers used to call “Cul d’Ours” (Bear Ass!).
Then we welcomed home Eté Indien de la Chaumière d’Hénélia, my little Indy, a wonderful dog! We had opportunities to compete in dog shows in 2009, with Chubby, at that time there were fewer Aussies than today.

Hiela chiot
My parents decided to mate Indy and Chubby, registering the litter to the French Registry (LOF). Hiela was born, I and fell in love with her since the very first weeks of her life. She had brothers and sisters but the only one I saw was her! It wasn’t planned, but I decided to keep her. I couldn’t let her go. We enjoyed ourselves in the conformation ring where she had good results. She’s now spayed and lives by our side.
​